It's been a while since my last post... yet again, although this time at least, it's not entirely my fault. Relatedly, progress has been hindered.  I was foolish enough to let my guard down and 'em exams crept up on me. Hopefully they'll soon get off my plate and I'll be able to resume work. Until then, here is a tiny screenshot just to keep you happy, it'll probably be very familiar ^^ 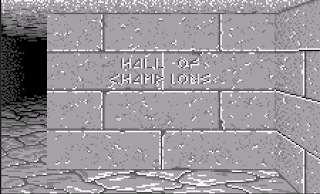 The first chunk of graphics code is somewhat ready, sans some "minor" bug fixes in the current codebase, like the piece of code that tells other pieces of code where things are and which way they want to look gets it wrong about half the time. Also if on the off chance you happen to check out the engine in it's current state, you'll notice that the portraits and the ornaments are not shrunk but rather clipped and they are drawn with mismatched colours. After correcting the faulty logic, next up I think will be to add some GUI display. After the GUI is ready enough, character selection should be next up. It'll require further code to handle interacting with the dungeon, with portraits to be specific and also this is where mouse support comes in (which I should have implemented already). After that it's inventory management. This more or less follows my original plan.