Items in thy inventory 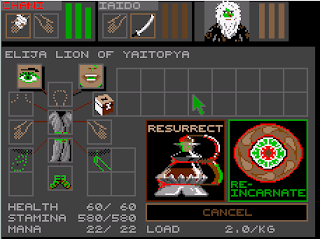 Progress has been slow lately, what I've managed to get into a working state is those icons in the inventory for display and to be able to actually choose one's champions. Of course, all the methods that the display function calls are done, so that should save me some time in the near future. As according to my plan inventory management is up next, thus picking up objects, thus display objects in the dungeon. The later brings us to my favorite function which I named cthulhu. It's 800 lines long and has about 70 locals with a bunch of them shared, good thing it's already up and running, took me like 7 clean hours of work with all the preparation and the function itself. As I mentioned progress has been slow, thus it is likely that my proposed plan will have to shift, alas we'll see what the future will bring.
Related to progress are my early commits, where I foolishly diverged from the original source a lot,  they have been a source of errors and headaches for a while now. That should change soon, as I plan on reversing those relative changes to match the original one by one in the coming days.